Washington, DC, March 28, 2012 – Today the CSB released its latest compilation of safety videos entitled “Safety Videos Volume 2” which includes, “Fatal Exposure: Tragedy at DuPont” detailing three accidents over a 33 – hour period at the DuPont plant in Belle, WV; “Experimenting with Danger” which focuses on the hazards associated with conducting research at chemical laboratories in academic institutions; and “Iron in the Fire” which discusses three iron dust fires that occurred in 2011 at the Hoeganaes plant in Gallatin, TN.

To date, the CSB has produced 28 safety videos. All are based on actual CSB investigation findings, determinations of root causes, and safety recommendations. The goal of the videos is to present CSB investigation 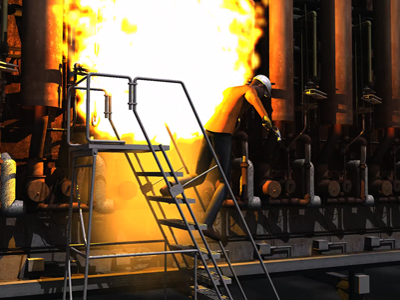 findings in a concise and compelling format that encourages the viewer to apply the lessons learned to real world plant operations.

CSB Chairman Rafael Moure-Eraso said, “The CSB’s safety video program has served as a highly successfully way to communicate the root causes and findings resulting from the CSB’s accident investigations; across industries and continents, demand for CSB safety videos is global.”

The CSB’s safety videos continue to garner awards, including three recent Peer Awards given by the Television, Internet & Video Association of Washington, DC in November 2011. “The CSB video program was specifically cited when the CSB was named the 2008 recipient of the American Chemical Society’s (ACS) Howard Fawcett Award, honoring “outstanding contributions in the field of chemical health and safety,” marking the first time the 25-year-old award has been presented to an entire organization.

The CSB will continue to distribute “Safety Videos Volume 1” a two disc set which includes 25 videos released between December 2005 and March 2011. All safety videos are distributed free of charge. Over 100,000 DVDs have been distributed and online downloads and streams of the videos on CSB.gov and on YouTube.com/USCSB total well over one million.

The CSB is an independent federal agency charged with investigating serious chemical accidents. The agency’s board members are appointed by the president and confirmed by the Senate. CSB investigations look into all aspects of chemical accidents, including physical causes such as equipment failure as well as inadequacies in regulations, industry standards, and safety management systems.

The Board does not issue citations or fines but does make safety recommendations to plants, industry organizations, labor groups, and regulatory agencies such as OSHA and EPA. Visit our website, www.csb.gov.