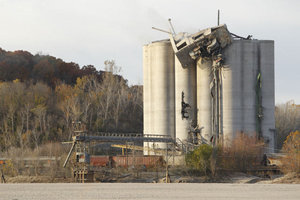 “The deaths of these six workers could have been prevented had the grain elevator’s operators addressed hazards that are well known in this industry,” U.S. Secretary of Labor Hilda L. Solis said in announcing the citations and $406,000 in proposed fines against Bartlett Grain Co. L.P.

“Bartlett Grain’s disregard for the law led to a catastrophic accident and heartbreaking tragedy for the workers who were injured or killed, their families and the agricultural community,” Solis added.

The Labor Department’s Occupational Safety and Health Administration proposed the penalties after accusing the firm of five willful and eight serious workplace safety violations in the aftermath of the Oct. 29, 2011, explosion.

OSHA defines a “willful” violation as having been committed “with intentional knowing or voluntary disregard for the law’s requirements, or with plain indifference. …”

Specifically, OSHA investigators found that Bartlett allowed grain dust — which is estimated to be nine times as explosive as coal dust — to accumulate; removed dust without shutting down ignition sources; repeatedly started and stopped equipment to free up grain, and used inappropriate electrical equipment in a grain dust environment.

But Bartlett officials issued a strong denial Thursday, calling the federal citations “flawed,” and said that they take “extreme exception to the willful characterization.”

Company president Bob Knief said in a prepared statement that the cause of the accident is still undetermined and “we certainly look forward to proving wrong OSHA’s unfortunate citations and characterization.”

He noted that, while OSHA asserted that accumulated grain dust helped ignite the explosion, “the evidence is clear and incontrovertible that the grain and dust found by OSHA after the incident was deposited by the accident, and could not have been there prior to the accident.”

Working in grain elevators is one of the most dangerous jobs in what has become America’s most hazardous industry: agriculture. And while deaths from grain elevator blasts such as the one in Atchison are rare, grain bin accidents such as suffocations remain all too common.

“This is a substantial fine,” said Ron Hayes, a workplace safety advocate whose son died years ago in a grain elevator suffocation accident. “But if this is a willful violation, OSHA should follow through and seek criminal charges, as they have historically done in cases like this.”

OSHA spokesman Scott Allen said that seeking criminal charges in the case is a matter for the Department of Labor’s Office of the Solicitor, adding “that decision has not been made as of yet.”

In addition to Bartlett Grain, OSHA also cited Topeka-based Kansas Grain Inspection Services Inc., a contractor employed by Bartlett, for one willful, one serious and one other-than-serious violation, and proposed $67,500 in fines against that company.

Officials at the Kansas Grain Inspection Service said Thursday in a statement that the citations “contradict OSHA’s own instructions that have governed our industry for more than 15 years.”

OSHA cited KGIS for failing to provide fall protection, but company officials noted that “the explosion that killed (our employees) didn’t have anything to do with a fall and, in fact, they weren’t even outdoors when the explosion took their lives.”

“We respectfully, but strongly disagree with OSHA and believe its treatment of KGIS is unfair,” they said. “We plan to appeal the citations and trust the OSHA Review Commission or, if necessary, a federal court will set them aside.”

Both companies have 15 business days to contest the proposed fines.