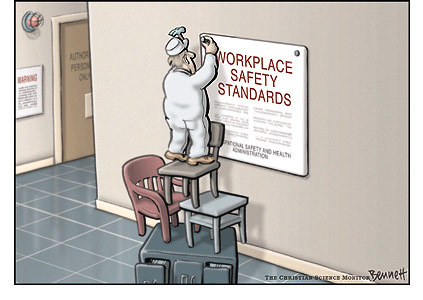 Many employers are in the dark over whether their safety incentive programs encourage or discourage the reporting of injuries and illnesses by their employees, or if they have no effect.

But a new report says employers, and the federal officials who oversee workplace safety, should care what effects the incentives are having.

In March 2005, 15 workers died and 180 others were injured in an explosion at the BP Texas City refinery. A safety incentive program at the refinery rewarded workers with bonuses for achieving low rates of injuries and illnesses. A 2007 study after the explosion found that workers feared reprisals for reporting potentially risky conditions at the refinery.

That accident also prompted members of Congress to ask the federal Government Accountability Office (GAO) to look into safety programs. In 2009, GAO issued a report that found that safety incentive programs “can provide disincentives for workers to report injuries and illnesses to their employers.”

The GAO has again visited the issue of injury reporting and in its latest study out this week is recommending that the Occupational Safety and Health Administration (OSHA) do more to shed light on the effects of incentives and other programs on reporting.

Knowing the effects is important not only for employers, but also for OSHA, which relies heavily on workers to report injuries and illnesses to their employers, and on employers to accurately report this information to OSHA.

Since it does not currently address incentive programs in its guidance and field operations manual, OSHA could be recognizing some employers as having exemplary safety systems without realizing the negative effects on reporting of some of their incentive programs, GAO warned.

“Without accurate data, employers engaged in hazardous activities can avoid inspections and may be allowed to participate in voluntary programs that reward employers with exemplary safety and health management systems by exempting them from routine inspections,” GAO said.

Insurers are also interested in knowing if injuries are being accurately reported since they use employers’ illness and injury rates among other factors in setting workers’ compensation premiums.

Although OSHA is not required to regulate safety incentive programs, GAO urged OSHA to address the potential effects of such programs and other workplace safety policies on injury and illness reporting.

In response to GAO’s inquiries, OSHA recently issued a memo, warning employers that some programs that discourage employees from reporting their injuries are problematic because an employer may not “in any manner discriminate” against an employee because the employee exercises a protected right, such as the right to report an injury.

In addition, OSHA warns, “if the incentive is great enough that its loss dissuades reasonable workers from reporting injuries,” the program could result in an employer being in violation of recordkeeping responsibilities.

OSHA issued this memo to regional and whistleblower program officials in March and published it on its website but it has not yet incorporated it into its field operations manual. OSHA also has guidance under its whistleblower section on retaliation by employers against employers who report injuries.

OSHA said it has received reports of disciplinary action against employees who are injured on the job, such as where an employee does not report an injury or illness in a timely manner. OSHA said employers have a legitimate interest in establishing reporting procedures but they may “not unduly burden the employee’s right and ability to report.” For example, the rules cannot penalize workers who do not realize immediately that their injuries are serious enough to report, or even that they are injured at all. Nor may enforcement of such rules be used as a pretext for discrimination.

OSHA acknowledges that some employers establish programs that “unintentionally or intentionally provide employees an incentive to not report injuries.” For example, an employer might enter all employees who have not been injured in the previous year in a drawing to win a prize, or a team of employees might be given a bonus if no one from the team is injured over a period of time.

“Such programs might be well-intentioned efforts by employers to encourage their workers to use safe practices. However, there are better ways to encourage safe work practices, such as incentives that promote worker participation in safety-related activities, such as identifying hazards or participating in investigations of injuries, incidents or ‘near misses,’” OSHA says.

OSHA’s guidance for its Voluntary Protection Programs (VPP) cite various positive incentives, including providing t-shirts to workers serving on safety and health committees; offering modest rewards for suggesting ways to strengthen safety and health; or throwing a recognition party at the successful completion of company-wide safety and health training.

Behavior-based programs provide rewards for demonstrating safe behaviors but are not tied to low injury and illness rates. For example, an employer may reward workers with gift cards for identifying hazardous conditions and suggesting safety improvements. These systems may also include demerit systems that discipline workers for failing to follow safety procedures.

In 2010, from its survey, GAO estimated that 25 percent of U.S. manufacturers had safety incentive programs, and most had other workplace safety policies that, according to experts and industry officials, may affect injury and illness reporting. Safety programs and policies are more common among larger manufacturers.

GAO found that there is little definitive research on the effects of safety incentive programs and other workplace safety policies on workers’ reporting of injuries and illnesses, but some of the 50 experts and industry officials GAO interviewed suggested that rate-based programs may discourage reporting.

Several experts told GAO that there may be an unintended consequence of rate-based programs. For example, when workers’ injuries are relatively minor or easy to hide, and if the rewards provided under the program are relatively large, workers may not report their injuries to preserve their rewards.

The experts also suggested that that certain polices, such as post-incident drug and alcohol testing, as well as demerit programs that are used to discipline unsafe workers, may discourage workers from reporting.

But how safety is managed in the workplace, including employer practices such as fostering open communication about safety issues, may encourage reporting of injuries and illnesses.

Quantifying the effects safety incentive programs may have on injury and illness reporting is difficult because researchers do not have access to workers’ medical records, according to GAO.

The GAO report may be downloaded here:  GAO-on-OSHA-Safety-Incentives