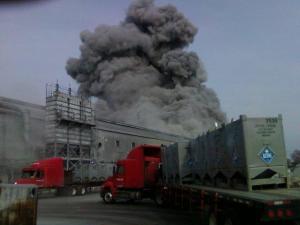 Louisville, Kentucky, February 7, 2013 – A large explosion at Carbide Industries that killed two workers and injured two others here on March 21, 2011, resulted from a failure by the company to investigate similar but smaller explosive incidents over many years while deferring crucial maintenance of the large electric arc furnace that blew up, according to a U.S. Chemical Safety Board (CSB) draft final report on the accident released today.

The report, which contains recommendations to prevent such explosions in similar furnaces, is scheduled to be discussed at a CSB public meeting in Louisville this evening, after which the board will vote on whether to approve it.

The deaths and injuries likely resulted when water leaked into the electric arc furnace causing an over-pressure event, ejecting furnace contents heated to approximately 3800 degrees Fahrenheit. Along with molten calcium carbide, the furnace spewed powdered debris and hot gases, which blew through the double-pane reinforced glass window of the furnace control room that was located just 12 feet from open vents atop the furnace. The two workers inside died within 24 hours from severe burn injuries.

CSB Chairperson Rafael Moure-Eraso said, “This accident is literally a case study into the tragic, predictable consequences of running equipment to failure even when repeated safety incidents over many years warn of impending failure. When control room windows blew out during previous furnace incidents, the company merely reinforced them, rather than taking the safe course and moving the control room farther from the furnace and investigating why the smaller furnace overpressure events were happening in the first place. It is what we call a ‘normalization of deviance,’ in which abnormal events become acceptable in everyday operations.”

The facility, located by the Ohio River in the “Rubbertown” section of western Louisville, supplies calcium carbide primarily to the iron and steel industry and to acetylene producers. It employs about 160 workers in operations, maintenance, and administration.

The investigation report proposed two scenarios for the development of cooling water leaks that likely resulted in the overpressure and explosion.  In one scenario, fouling – or the accumulation of solids inside the hollow chamber where water flows – resulted in localized overheating, eventually causing sections of the cover to sag and crack.

Another possible cause of the leaks could have been the sudden eruption of hot liquid from the furnace, which operators called a “boil-up.” Hot liquids contact the underside of the furnace cover, eroding its ceramic lining, and eventually melting holes through which water leaks.  Post-incident examination revealed recurring water leaks in multiple zones of the furnace cover.  Rather than replacing the furnace cover, the company directed workers to attempt repairs. The investigation found that the company would inject a mixture of oats and commercially available “boiler solder” into the cooling water, in an effort to plug the leaks and keep the aging cover in operation.

Water leaks into the furnace interfere with the steady introduction of lime and coke raw materials, through an effect known as “bridging” or “arching,” the report noted. In a carbide-producing electric arc furnace, this can result in an undesirable and hazardous side reaction between calcium carbide and lime, which produces gas much more rapidly that the normal reaction to produce calcium carbide itself.  Industry literature described the phenomenon as early as 1965, and an independent CSB analysis confirmed that operating conditions at Carbide on the day of the incident could have resulted in this effect, causing hot materials to be expelled from the furnace.

CSB lead investigator Johnnie Banks said, “One of our key findings was that Carbide Industries issued 26 work orders to repair water leaks on the furnace cover in the five months prior to the March 2011 incident. It was distressing to find that the company nonetheless continued operating the furnace despite the hazard from ongoing water leaks. We also found that the company could have prevented this incident had it voluntarily applied elements of a process safety management program, such as hazard analysis, incident investigation, and mechanical integrity.”

Investigator Banks noted that Carbide was not required to follow the OSHA Process Safety Management standard, since the company did not use threshold amounts of covered hazardous chemicals.

The report notes that Carbide continued operating the furnace even though it planned to replace the furnace cover in May 2011. The accident occurred in March of that year.

The investigation found that National Fire Protection Association (NFPA) industry codes governing the safe operation of potentially hazardous Class A furnaces, such as the one at Carbide, do not have specific requirements for appropriate safety devices, interlocks, and safe distances between the furnaces and occupied work areas. The draft report recommended that the NFPA develop a national standard requiring companies to provide adequate safety instrumentation and controls to prevent explosions and overpressure events, mechanical integrity and inspection programs, and a documented siting analysis to ensure that control rooms and other occupied areas are adequately protected.

Carbide Industries was urged to modify the design and procedures for the electric arc furnace and related structures, including the control room, to comply with the standard the NFPA was recommended to develop, and to implement a mechanical integrity program for the electric arc furnace and cover, including preventive maintenance based on periodic inspec­tions, and timely replacement of the furnace cover. At a minimum, the CSB said, the mechanical integrity program should include leak detection and repair and monitoring refractory lining wear.

Chairman Moure-Eraso said, “In my view, a national standard adopted by industry and incorporated into state and federal requirements would go a long way to prevent the kind of tragedy that befell the workers at Carbide Industries. While that is important, it’s clear that Carbide displayed a chronic lack of commitment to figuring out what was going wrong, ignoring all the warning signs, even as its workers were exposed to a potential massive explosion just a few feet away from their control room.”

The CSB is an independent federal agency charged with investigating industrial chemical accidents. The agency’s board members are appointed by the president and confirmed by the Senate. CSB investigations look into all aspects of chemical accidents, including physical causes such as equipment failure as well as inadequacies in regulations, industry standards, and safety management systems.

The Board does not issue citations or fines but does make safety recommendations to plants, industry organizations, labor groups, and regulatory agencies such as OSHA and EPA. Visit our website, www.csb.gov

One thought on “CSB Releases Draft Final Report on Carbide Industries Explosion that Killed Two in Louisville, Kentucky in 2011”