Of the more than 65,000 people killed in car crashes over the past two years, one in 10 were in crashes where at least one of the drivers was distracted. That’s according to police report data analyzed by Erie Insurance in the Fatality Analysis Reporting System (FARS), a nationwide census of fatal motor vehicle traffic crashes maintained by the National Highway Traffic Safety Administration. 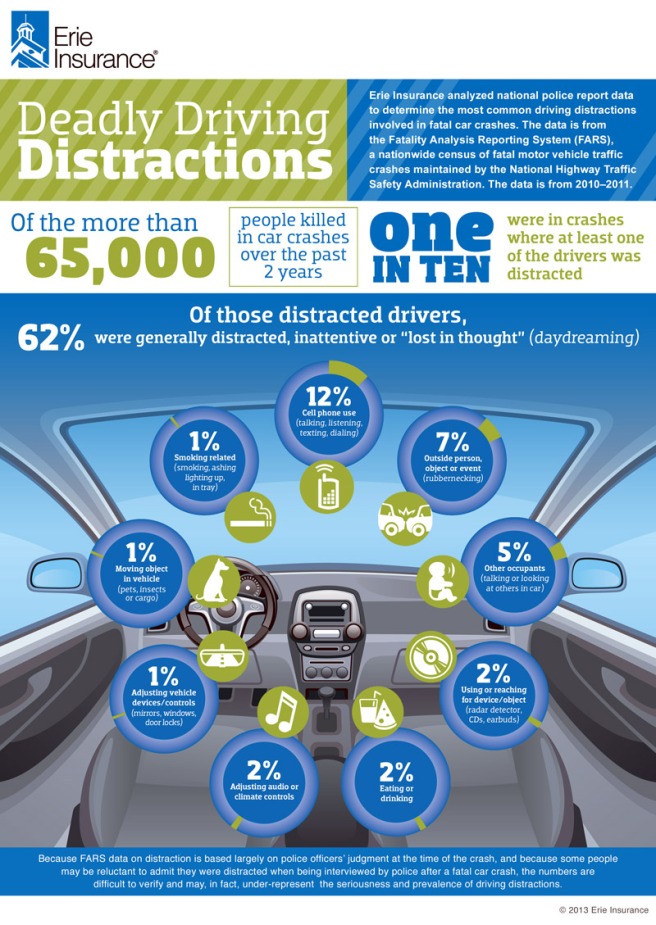 “Distracted driving is any activity that takes your eyes off the road, your hands off the wheel, or your mind off your primary task of driving safely,” said Doug Smith, senior vice president of personal lines at Erie Insurance. “We looked at what law enforcement officers across the country reported when they filled out reports on fatal crashes and the results were disturbing. We hope the data will encourage people to avoid these high-risk behaviors that needlessly increase their risk of being involved in a fatal crash.”

The analysis, which looked at data from 2010 and 2011, showed police listed the majority of drivers who were distracted as “generally distracted” or “lost in thought.” Police also listed several more specific types of distractions.

Below are the top 10 distractions involved in fatal car crashes:

Smith added that because FARS data on distraction is based largely on police officers’ judgment at the time of the crash, and because some people may be reluctant to admit they were distracted when being interviewed by police after a fatal car crash, the numbers are difficult to verify and may, in fact, under-represent the seriousness and prevalence of driving distractions.

The data is meaningful, however, because unlike surveys in which consumers self-report the types of distracted behaviors they engage in, the FARS data is based on actual police reports on fatal crashes.