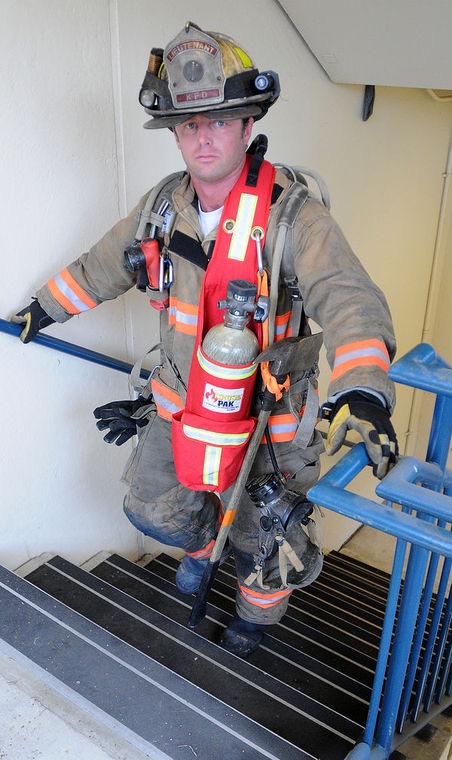 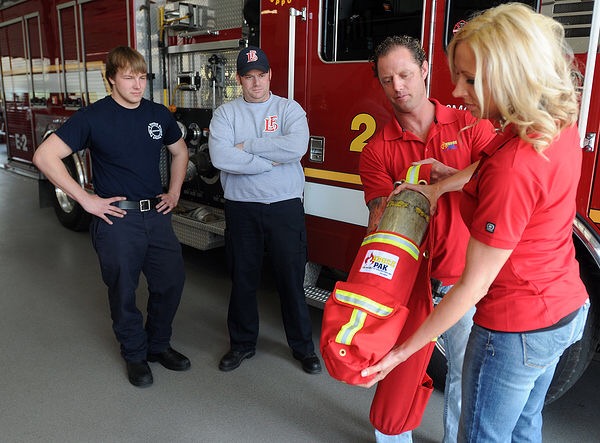 You can’t draw a straight line from a firefighter’s death in North Carolina to a St. Anne family that can’t afford a vacation, and onto the set of the TV show “Chicago Fire.”

Those unlikely scenes, though, are part of the personal history David and Tiffany Kruse, of St. Anne, are offering as they explain the evolution of an idea. It’s a brainstorm that might become one of the firefighting industry’s most unexpected success stories.

“I first had this idea back in 2011, but I thought it was just a pipe dream,” David said. He was referring to his plan for a specially-designed strap that would allow firefighters to carry extra air tanks as they entered a smokey building. Under physical stress, a single tank will last only 12 to 17 minutes. Having a handy spare, while keeping the firefighters’ hands free, could be the difference between life and death.

“I read the report of that fire captain in North Carolina. He died in a fire in a five-story medical building,” he said. “The smoke got heavy on the third floor. They had to get to the fifth floor. He ran out of air.”

After two prototypes, the Kruses found a concept they could market. They started the expensive process to obtain a patent, and began the painfully sluggish journey to firehouse acceptance.

“The slowness discourages him,” Tiffany said. “In some cases we have to get approved vendor status, and that takes time. In other cases things can move faster than we imagine.”

For example, the Chicago Fire Department has yet to approve purchases of what has been labeled the Krusepak. Meanwhile, on the set of Chicago Fire, the new gear has made its way into three episodes, with a fourth coming out in May.

“They were even going to use the name, Krusepak, in the script,” Tiffany added. “But there’s a character on the show named ‘Cruz,’ so they thought it might be confusing.”

Maybe the TV appearance sparked extra interest, but the Kruses are getting calls now from as far away as Japan. Departments — including those in Austin, Texas, and Los Angeles County — are checking out demo units. Several area departments and South Suburban stations are already using the Krusepaks, including Kankakee City, where David has worked for the past 13 years.

“I’m working full time there, and I have some shifts in Monee,” said David, 37. “So, I see the family just about every day, but I don’t have a lot of time to get out and market this.”

“And I feel like a single mom, sometimes, but I’m working on getting the demos out and filling orders, and planning our booth,” Tiffany said, referring to a major firefighters conference coming up in Indianapolis.

With legal costs for the patent now exceeding $25,000, and a $5,000 check needed to reserve the booth at Indy, the Kruses are hoping for some financial rewards down the road.

“Right now, I’m sure the mortgage company is worried about their payment,” she said. “We’ve put our life savings into this. This is getting a little stressful.”

“Really, though, this [product development] ride has been fantastic. It’s something most people will never do,” David said. “I’m lucky: I really enjoy working with my wife on this. And I totally believe that we’re going to succeed, if we keep working on it.”

That workload includes expanding the uses for the Krusepak. While it was initially thought of as a tool for working high-rise fires, it’s being used by rural departments, too. It facilitates bringing extra equipment to a fire that requires a long walk to the site. The Krusepak also adapts for use in auto and truck extrications, scuba rescues and other circumstances.

“I remember thinking this whole idea is too easy. It’s too simple,” David said. “But I’ve done a lot of research and there’s nothing out there like this out there.”