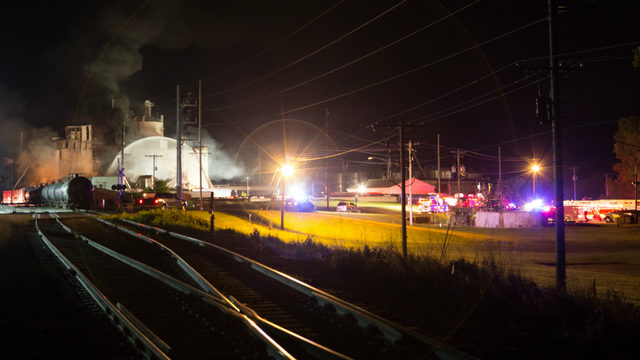 CAMBRIA, Wis. – Numerous fire crews raced to the scene of a large explosion and fire in a corn milling plant in this village north of Madison, Wisconsin, reports CBS Madison affiliate WISC-TV. It happened at Didion Milling, whose president, Riley Didion, said, “We are praying for our team. There’s a lot we don’t know right now. Our prayers are with everyone.”

Authorities said at a morning news conference one person was killed, 11 were hurt and two others were unaccounted for. It wasn’t clear if the two were the ones mentioned in this WISC-TV tweet:

Employee at plant says a group of her friends were in trapped inside the building during explosion. 2 are out safe, 2 are missing. #news3

That employee, Nayeli Hernandez, told WISC, “I got a phone call from my brother. I called a coworker who is another lab tech. They were trapped inside. A big explosion happened, then everything just collapsed,” Hernandez said.
The Red Cross’ Barbara Behling said the man who was killed has a 13-month-old baby with his girlfriend. She and his grandmother were on hand to be notified of his death. His parents live out of state.

One of the injured victims had to have his legs amputated, Behling said.
The plant also makes ethanol and earlier reports said the blast occurred in that part of the facility. A Didion representative told reporters Thursday morning the cause of the explosion was being investigated.

Cambria Village President Glen Williams told WISC the three- or four-story structure hit by the explosion housed the mill’s lab and was leveled, adding there was no danger to the public and no need for evacuation.

Williams said the mill processes corn and corn by-products for ethanol plants. Didion’s ethanol plant is across the street from where the explosion happened and isn’t in any danger, he said.

Officials with the Madison Fire Department confirmed to WISC that a heavy urban rescue team from Madison was called to assist.

Cambria Village Clerk/Treasurer Lois Frank told the local newspaper, the Daily Citizen, “We heard a loud boom and the house shook.” She said she lives four blocks from the plant.

Wisconsin Department of Transportation officials said all lanes of the major highway in the vicinity were closed in both directions near the plant
Hundreds of homes and businesses in Cambria and nearby Randolph lost power.

Schools in the Cambria-Friesland school district are closed Thursday due to the explosion.