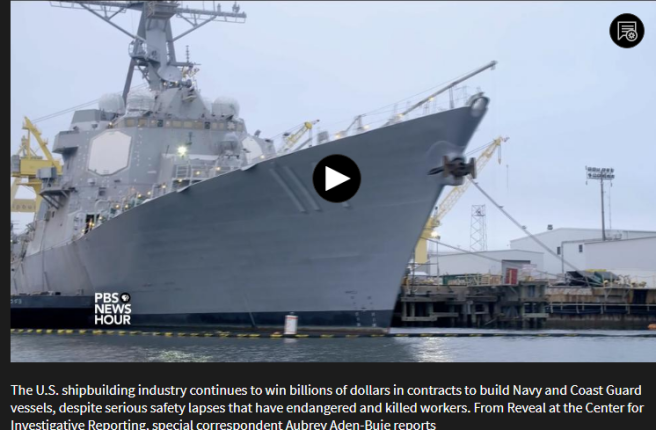 The U.S. shipbuilding industry continues to win billions of dollars in contracts to build Navy and Coast Guard vessels, despite serious safety lapses that have endangered and killed workers. From Reveal at the Center for Investigative Reporting, special correspondent Aubrey Aden-Buie reports.

A Mississippi shipbuilder continues to reap lucrative federal contracts despite objections from U.S. Sen. Elizabeth Warren and a top occupational safety expert, who have called on the U.S. Navy to stop doing business with dangerous companies.

VT Halter Marine Inc. has received at least $5.4 million from the Navy, the Coast Guard, NASA and the National Oceanic and Atmospheric Administration since the Navy shipbuilder was the focus of a Reveal investigation in February.

Reveal produced a television version that aired tonight on PBS NewsHour. An update on the shipbuilding investigation will air Saturday on Reveal.

The largest of the more recent contracts is a nearly $4 million award from the Coast Guard to develop designs for polar icebreakers. Coast Guard and Navy officials will leverage the designs to refine the icebreaker’s specifications before awarding a contract for its construction.

Reveal’s investigation showed that since October 2008, the Navy and Coast Guard’s seven major private shipbuilders received more than $100 billion in federal contracts despite penalties for serious safety lapses that have endangered, injured and, in some cases, killed workers. Shipbuilding is dangerous, but repeated failures by the shipbuilders make it more dangerous than it has to be, safety experts say.

On the campaign trail, President Donald Trump called for the largest expansion of the Navy since the Reagan era. While his latest budget proposal calls for just modest increases, it will give the U.S. shipbuilding industry a substantial boost – and potentially pose more danger for workers.

Navy officials say it is not their job to enforce workplace safety laws in private shipyards. In March, Trump signed into law a resolution overturning an Obama-era rule requiring companies vying for large federal contracts to disclose past safety violations.

A spokeswoman for the Navy’s Naval Sea Systems Command, known as NAVSEA, which oversees ship construction, could not be immediately reached for comment today.

In addition, Warren and David Michaels, the former head of the Occupational Safety and Health Administration under President Barack Obama, called on the Navy to halt contracting with shipbuilders that endanger workers.

“Businesses that injure workers are businesses that are poorly managed,” Michaels wrote in an email today. “I have no doubt that a Navy policy to stop giving contracts to shipbuilding firms that flaunt the law and injure workers would save many lives and limbs, and would provide higher quality work for the American taxpayer.”

A VT Halter spokeswoman did not respond to a voicemail seeking comment.

See more of this story and others here.