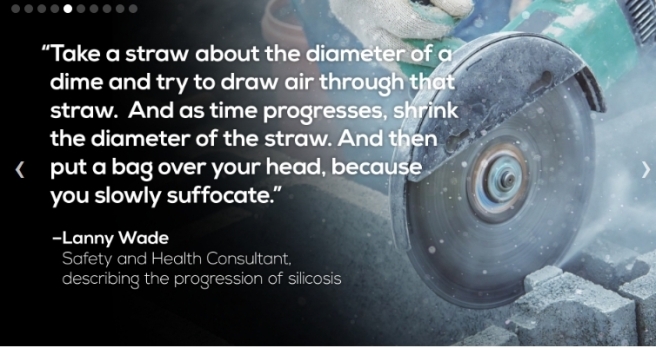 OSHA will delay enforcement of the respirable crystalline silica standard for construction until September 23, 2017, to conduct additional outreach and provide educational materials and guidance for employers. See the memorandum.

The Occupational Safety and Health Administration (OSHA) has issued a final rule to curb lung cancer, silicosis, chronic obstructive pulmonary disease and kidney disease in America’s workers by limiting their exposure to respirable crystalline silica. The rule is comprised of two standards, one for Construction and one for General Industry and Maritime.

OSHA estimates that the rule will save over 600 lives and prevent more than 900 new cases of silicosis each year, once its effects are fully realized. The Final Rule is projected to provide net benefits of about $7.7 billion, annually.

About 2.3 million workers are exposed to respirable crystalline silica in their workplaces, including 2 million construction workers who drill, cut, crush, or grind silica-containing materials such as concrete and stone, and 300,000 workers in general industry operations such as brick manufacturing, foundries, and hydraulic fracturing, also known as fracking. Responsible employers have been protecting workers from harmful exposure to respirable crystalline silica for years, using widely-available equipment that controls dust with water or a vacuum system.

Both standards contained in the final rule take effect on June 23, 2016., after which industries have one to five years to comply with most requirements, based on the following schedule:

Construction – September 23, 2017. OSHA delayed enforcement in order to conduct additional outreach and provide educational materials and guidance for the employer. See the memorandum.

Hydraulic Fracturing – June 23, 2018, two years after the effective date for all provisions except Engineering Controls, which have a compliance date of June 23, 2021.

The U.S. Department of Labor first highlighted the hazards of respirable crystalline silica in the 1930s, after a wave of worker deaths. The department set standards to limit worker exposure in 1971, when OSHA was created. However, the standards are outdated and do not adequately protect workers from silica-related diseases. Furthermore, workers are being exposed to silica in new industries such as stone or artificial stone countertop fabrication and hydraulic fracturing.

A full review of scientific evidence, industry consensus standards, and extensive stakeholder input provide the basis for the final rule, which was proposed in September 2013. The rule-making process allowed OSHA to solicit input in various forms for nearly a full year. The agency held 14 days of public hearings, during which more than 200 stakeholders presented testimony, and accepted over 2,000 comments, amounting to about 34,000 pages of material. In response to this extensive public engagement, OSHA made substantial changes, including enhanced employer flexibility in choosing how to reduce levels of respirable crystalline silica, while maintaining or improving worker protection.

OSHA looks forward to working with employers to ensure that all workers exposed to respirable crystalline silica realize the benefits of this final rule. Please check back for frequent updates on compliance assistance materials and events, and learn about OSHA’s on-site consulting services for small business.

OSHA approved State Plans have six months to adopt standards that are at least as effective as federal OSHA standards. Establishments in states that operate their own safety and health plans should check with their State Plan for the implementation date of the new standards.