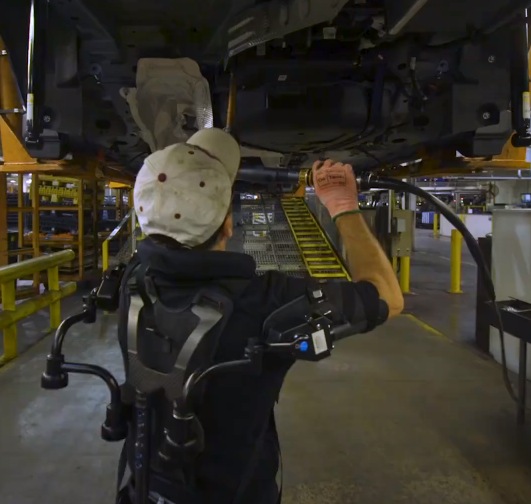 The EksoVest is designed to reduce worker fatigue and injuries due to overhead assembly tasks.

But the workers who assemble those trucks in Ford’s manufacturing plants are subject to human frailties. They can suffer from back and shoulder pain as a result of carrying out the repetitive tasks required by their jobs, particularly as they work on chassis suspended above them. Ford estimates that some assembly workers lift their arms about 4,600 times per day, or about 1 million times per year.

So workers on Ford’s assembly lines in two U.S. factories are getting some extra help. In a pilot project, the workers are suiting up with the EksoVest, an upper body exoskeleton from the Bay Area company Ekso Bionics. Ford plans to expand the test to factories in Europe and Latin America.

Ekso Bionics is primarily known for its work in the medical sector: The company sells a lower-body exoskeleton that enables paraplegic people to walk again.

But Russ Angold, cofounder and CTO of Ekso Bionics, tells IEEE Spectrumthat he’s also found significant demand in the industrial sector for exoskeletons. “In 2015 we started getting a lot of inquiries, cold calls coming in, with people asking, ‘Where’s our construction exoskeleton, where’s our industrial exoskeleton?’” Angold remembers. “They’d say, ‘You guys are helping paralyzed people walk, can you use the same tech to make our workers stronger?’”

The company had a lot of relevant technology “sitting on the shelf,” Angold says. He notes that the company’s origins lie in a DARPA research project in the early 2000s that sought a full-body exoskeleton to help soldiers carry heavy loads.

The upper-body EksoVest ended up being much simpler than other Ekso technologies. The vest is unpowered and doesn’t have any robotic smarts to predict the user’s movements. Angold says the vest evolved into this form as the company worked with Ford to test prototypes. “It took a while to get to a product that makes sense, that’s comfortable for all-day usage,” he says.

The EksoVest elevates and supports a worker’s arms while the worker is performing overhead tasks, and provides adjustable lift assistance of five pounds to 15 pounds per arm. “We want to make the arms feel weightless,” says Angold, comparing the “neutral buoyancy” to the way a swimmer’s limbs feel in water. “Usually workers are pushing up with about 15 pounds of force, depending on the weight of their arms,” he says. “So we take that 30 pounds of upward force, and transfer it down to the user’s hips.”

Angold says Ekso may design a powered upper-body exoskeleton in the future for industrial applications, but right now the company is happy to keep it simple. “There are no batteries to deal with, no sensors,” he says. “The EksoVest just cancels out the effect of gravity,” thus reducing the strain and fatigue that assembly line workers deal with every day.

This promotional video from Ford shows the EksoVest in action at one of its factories:

Read the rest of the story here.

See the Ford & EksoVest Partnership and how You Can Get A Demo here!

Video Courtesy of “The Verge”