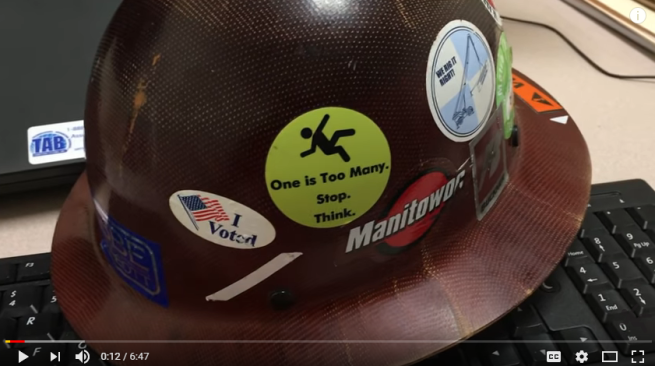 An individual was working on a slurry wall panel installation. The crew had just finished hoisting a re-bar panel to vertical, when a 10″ cut-off piece of #12 re-bar fell 90 feet from the top of the panel, and stuck the employee directly on the top of his hard hat. You can see the obvious big hole in the attached photo in his hard hat.

Due to his wearing the hard hat, the employee only suffered a bad lesion on his head, requiring a few stitches and staples, and a concussion. We all can conjure up some images in our own minds of what “could have been” the story, had his hard hat not absorbed most of the impact.

Photo above courtesy of Ed Davidson

Along with the video above, below are some tips on how to inspect and care for your hardhat!

General Inspection
The hard hat consists of two components: the shell and the suspension. Both require inspection during assembly and before each use. During shell inspection, you should look for cracks, nicks, dents, gouges, and any damage caused by impact, penetration, abrasions, or rough treatment.

Additionally, if your hard hat is made of thermoplastic (polyethylene, polycarbonate) materials, inspect the shell for the following: stiffness, brittleness, fading, dullness of color, or a chalky appearance. If the shell exhibits any of these conditions or if it is obviously otherwise damaged, it should be removed from service and replaced immediately.

Inspecting for Effects of UV Exposure
Ultraviolet light is the hard hat’s worst enemy. Although ultraviolet inhibitors are added to some manufacturers’ hard hat shells, all hard hats are susceptible to deterioration from UV exposure over time. This is why it is so important that you never store your hard hat in the rear window of a vehicle, or anywhere that it is exposed to sunlight when not in use. If the work environment exposes the worker and hard hat to high levels of sunlight, the hat should be replaced more frequently.

Many times, outdoor workers wear hard hats in high-visibility colors so they will be more visible to fellow workers or to oncoming motorists. In these cases, it is especially critical to monitor hard hat color stability during prolonged daylight exposure. Replace hard hats as soon as fading is evident to ensure continued worker visibility and safety.

Field Testing for Degraded Shells
A simple field test can be performed to determine possible degradation of polyethylene shells: Compress the shell inward from the sides about 1 inch with both hands, then release the pressure without dropping the shell. The shell should quickly return to its original shape, exhibiting elasticity. There should be no residual deformation. Compare the elasticity of the sample with that of a new shell. If the sample does not exhibit elasticity similar to that of a new shell, or if it cracks because of brittleness, it should be replaced immediately.

Inspecting Your Suspension
The main purpose of a hard hat’s suspension is to absorb the shock of a blow to the top of the hard hat. Considering this, inspection of the hard hat suspension system is equally as important as inspecting the shell, but it is all too often overlooked.

The suspension should be inspected closely for cracks or tears, frayed or cut straps, loss of pliability, or other signs of wear. Whether your hard hat has a 4-point or 6-point suspension (the number of keys that are engaged in the hard hat’s shell), all keys should fit tightly and securely into their respective key slots. Refer to the manufacturer’s instructions on assembling. Any suspension that shows signs of damage should be removed from service and replaced immediately to ensure ongoing protection of the wearer.

Replacement Program
Hard hats have a reasonable service life when used in normal work environments and properly maintained. However, useful life is not indefinite, and there are some recommended guidelines for hard hat replacement.

Many employers replace all employees’ caps every five years, regardless of outward appearance. If the user environment is known to include higher exposure to temperature extremes, sunlight, or chemicals, hard hats should be replaced routinely after two years of use. Most hard hats have manufacture date codes molded on the underside brim of the cap so you can easily determine the age of the cap.

Regardless of the length of use, if a hard hat has been struck by a forcible blow of any magnitude, the shell and suspension should be replaced immediately, even if no damage is visible. Dropping a hard hat more than eight to ten feet warrants a replacement. Don’t take a chance that it “might” be OK, because it’s not worth the risk. Hard hats are designed to provide optimal protection under normal conditions. Any impact can substantially reduce the protection offered.

Use of Adhesive Stickers
It has become a common practice for hard hat users to apply self-adhesive stickers to “personalize” their hard hats or for other marking or identification purposes. Considering the type of adhesive used in typical pressure-sensitive stickers, there is very little potential for chemical interaction between the adhesive and the helmet shell. As a result, the use of stickers would not be expected to negatively affect the performance of the helmet under normal conditions.

There are a couple of rules to follow related to stickers. First, adhesive stickers should be placed at least 3/4 inch away from the edge of the helmet. This prevents the possibility of the sticker’s acting as a conductor between the outside and inside of the shell if it were to wrap around the brim. Second, the area of the helmet covered by stickers should be kept to a practical minimum to permit regular inspection of the helmet shell for signs of damage.

Hard Hats Worn Backward
There is considerable confusion and misinterpretation about whether OSHA allows hard hats to be worn backward. An OSHA Standard Interpretation and Compliance Letter dated July 22, 1992, states, “Because ANSI only tests and certifies hard hats to be worn with the bill forward (sic), hard hats worn with the bill to the rear would not be considered reliable protection and would not meet the requirements of 29 CFR 1926.100 (a) and (b) unless the hard hat manufacturer certifies that this practice meets the ANSI requirements.”

Prior to allowing employees to wear their hats backward, always get written verification from the hard hat manufacturer on whether your hard hat model has been tested and found to be compliant to the requirements of the American National Standards Institute standard when worn with the bill turned to the rear. The manufacturer may specify that proper performance requires the suspension to be reversed in the helmet so that the headband is oriented normally to the wearer’s head (i.e., with the brow pad against the forehead and the extended nape strap at the base of the skull). In this manner, only the shell of the helmet is positioned backward on the head.

Conclusion
If you are ever in doubt about the use or maintenance of your hard hat, contact the manufacturer directly for instructions and recommendations. The cost of maintaining and replacing your hard hat is well worth the benefits.

If the hard hat you put on every day is 10 years old and brittle from age, yet comfortable and familiar, do yourself and your family a favor by retiring it. Set it on your shelf as a keepsake and replace it with a hard hat that can provide the intended protection.

One thought on ““Do You Inspect Your Hardhat?” “Do You Know When To Replace It?” #Hardhat #Safety”