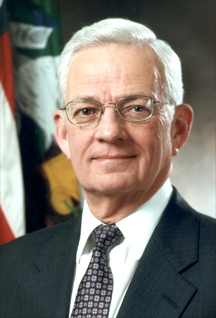 by Marie-Claire Ross at Digicast.com

A great safety speech isn’t about telling staff to improve safety. Instead, it’s a unique opportunity to motivate staff to work together for a common good.

On a windy day in October 1987, the new CEO of Alcoa, Paul O’Neill, gave his maiden speech to shareholders. Most CEO’s would use this opportunity to get shareholders excited that they were going to focus the company on increasing sales and reducing costs, for improved shareholder return. But O’Neill was different.

“I want to talk to you about worker safety.” In an instant, shareholders wondered why he had omitted to talk about improving profits. After all, Alcoa was in a mess.

“Every year, numerous Alcoa workers are injured so badly that they miss a day of work. Our safety record is better than the general workforce, especially considering that our employees work with metals that are 1500 degrees and we have machines that can rip a man’s arm off. But it’s not good enough. I intend to make Alcoa the safest company in America. I intend to go for zero injuries.”

As quoted in the Power of Habits by Charles Duhigg, the audience was confused. Why wasn’t O’Neill making them feel warm and fuzzy? How were they going to make money by focusing on safety?

Eventually, someone raised a hand and asked about inventories in the aerospace division. While another person asked about the company’s capital ratios.

O’Neill held firm, “I’m not certain you heard me. If you want to understand how Alcoa is doing, you need to look at our workplace safety figures. If we bring our injury rates down, it won’t be because of cheerleading or the nonsense you sometimes hear from other CEOs. It will be because the individuals at this company have agreed to become part of something important: They’ve devoted themselves to creating a habit of excellence. Safety will be an indicator that we’re making progress in changing our habits across the entire institution. That’s how we should be judged.”

At the end of his speech, the crowd ran out the door as if there was a fire. All in a panic-stricken rush to sell their Alcoa stock as fast as they could.

Those who held onto their Alcoa stock were handsomely rewarded. Within a year of O’Neill’s speech, Alcoa’s profits hit a record high. By the year 2000, when O’Neill retired, Alcoa’s market capitalization was 5 times more than what it was in 1987.

So what made O’Neill’s safety speech one of the best in the 20th century?

He started with why. As Simon Sinek says in the brilliant book, “Start with a Why”, great leaders communicate from the inside out. He started with a powerful “why”. O’Neill’s speech certainly got the attention of his audience. He then moved to “how” they were going to improve safety and then the “what”. Other leaders communicate the “what”, “how” and then the “why”. It would have been easy (and expected) for him to have just talked about improving sales and reducing costs (what) and then “how: they would do it. This would have kept shareholders and share brokers happy. Instead, he chose to talk about safety and become the champion for Alcoa workers.

One Behavior Change at a Time

As quoted in The Power of Habits, O’Neill said, “you can’t order people to change. That’s not how the brain works. So I decided I was going to start by focusing on one thing. If I could start disrupting the habits around one thing, it would spread throughout the entire company”.

He chose improving safety as the key habit to bring the entire company together. He chose a habit that would have everyone in alignment – unions and managers. And it meant total operational transformation.

Humans can only learn and remember so much information at once. The more information you give people – the more they can get paralyzed by it.

According to Chip and Dan Heath from “Made to Stick” creating a memorable message is all about stripping an idea down to its core.

O’Neill did this brilliantly when he focused the workforce on one aspect – safety. And then he made this memorable by creating the tagline “Zero injuries”.

The Power of the Group

But what he also did rather skillfully was to encourage group behavior. He encouraged Alcoa workers to consider the safety of the group rather than themselves. He rallied the workforce to work together for a common goal.

Humans see themselves in terms of other people and groups. Evolution has taught us that it is beneficial to live in tribes, where we can share out the work of daily survival.

O’Neill harnessed the strong human need for group identity to build a thriving organization. The trick in using group identity when wanting staff to change behavior or embrace a new goal is to word it so they make a decision based on what’s best for the group. Activating peer pressure is an effective way to get a group to persuade others to act in a certain way

And you’ll notice that O’Neill never used the word “I” in his speech. Saving lives wasn’t about him. It was about the group – it was about the Alcoa workforce.

He also cleverly used a shareholder meeting, to let his staff know, that he wasn’t there to increase shareholder returns. He was there to improve their quality of life, to ensure that they would arrive home safely at the end of the day. By launching his first speech to outsiders, he powerfully communicated to staff, just how committed he was to improve their workplace. That he could be trusted. That he was on their side.

He even took this further. According to Tim O’Bryan, in an article titled “Analytical Decision Making and the Alcoa Transformation”, O’Neill introduced a new companywide policy that whenever someone was injured, that the unit president had to report it to O’Neill within 24 hours and present a plan for making sure it never occurred again.

This opened up the flow of communication. Workers told their floor managers who told the vice president about injuries but also to raise warnings when they saw a potential problem. A suggestion box was filled with ideas for solutions so that if the vice president requested a plan, a collection of suggestions was submitted.

Spare No Expense on Safety

O’Neill believed that they way to keep employees staff was to discover why injuries were occurring in the first place.

This was done by studying what was going wrong in the manufacturing process. Employees received training about quality control and how to work more efficiently. By ensuring that employees developed the habit of doing tasks right in the first place, their work became safer.

Starting with his inaugural speech, Paul O’Neill transformed Alcoa into an efficient, open communication workplace that was the safest aluminum company on earth. By transforming workplace safety into a daily habit, O’Neill improved efficiency and sales.

See more articles by this author at Digicast.com