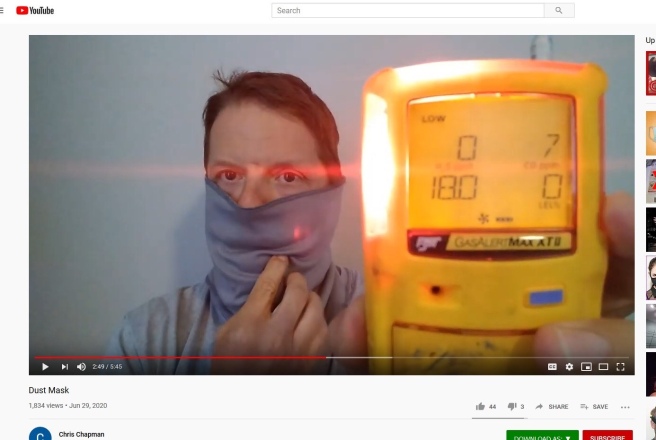 A screenshot of the video is posted above and here is the YouTube Video Link: https://www.youtube.com/watch?v=hdrEjCeZqlA

This video and many others like it are popping up on Facebook, YouTube, and other social media sites and are very misleading to the public and those of us wearing face masks during this pandemic. The article below addressed another video that went viral from a “would-be politician”. The information posted is just not accurate. If you want the actual facts on how to do this test watch the video below.

A viral video questions the safety of face masks by using a gas detector to purportedly show that masks result in dangerous oxygen levels for the wearer. But experts — and the company that makes the gas detector — say the video’s test is scientifically flawed.

In a popular video swirling on Facebook, a local official in Pennsylvania casts doubt on the safety of face masks by arguing that a test he performs on camera shows that masks prevent people from breathing “the required oxygen level.”

But the viral video’s test is scientifically flawed and its conclusions wrong, according to multiple experts.

The video by Jeff Neff — a firefighter and president of the borough council in Sewickley, Pennsylvania — was uploaded June 27 and has racked up more than 11,000 shares and more than 260,000 views. It’s one of many recent dubious claims about face masks, which the Centers for Disease Control and Prevention recommends be used to help limit the spread of COVID-19.

The CDC advises the general public to use cloth masks in public settings, especially when it is hard to maintain physical distancing. Experts, including those at the American Lung Association, have said masks do not cause low oxygen levels.

Neff, who unsuccessfully ran in the Republican primary in the state’s 37th senatorial district in June, begins with some correct statements about normal oxygen levels in air and federal workplace safety rules. The air is comprised of 21% oxygen, according to NASA, and the Occupational Safety and Health Administration, or OSHA, defines an “oxygen deficient atmosphere” — and therefore dangerous to life or health — as one in which oxygen falls below 19.5% by volume.

The central claims that follow, however, rest on an unsound test.

In the video, Neff uses a device for detecting gas levels to suggest that four different face masks deprive wearers of appropriate oxygen level intakes because the detector readings drop below 19.5% for oxygen. He concludes: “No matter what you choose — head sock, neoprene type fancy mask, cheap mask, N95, the best available — none of them allow you to breathe in the required oxygen level, which should be close to 21%.”

Experts we contacted disputed his methodology and findings.

“He’s really misinformed and ill-qualified” to be conducting such a test, said Thomas Fuller, an associate professor of health sciences at Illinois State University and member of the American Industrial Hygiene Association, who reviewed the video for FactCheck.org.

Fuller, a certified industrial hygienist, said the main issue with Neff’s test is that the meter, placed underneath the various masks, is picking up Neff’s own exhaled breath — which contains about 16% oxygen and includes other gases, such as carbon dioxide and nitrogen. “What he’s measuring is what he’s breathing out — it’s the gases that are taking up the concentration in that enclosed space,” Fuller said.

Read the rest of the article here on FactCheck.org

If you see a video like this with misleading information, report it to the platform as false information. We’ll all be better off for it.