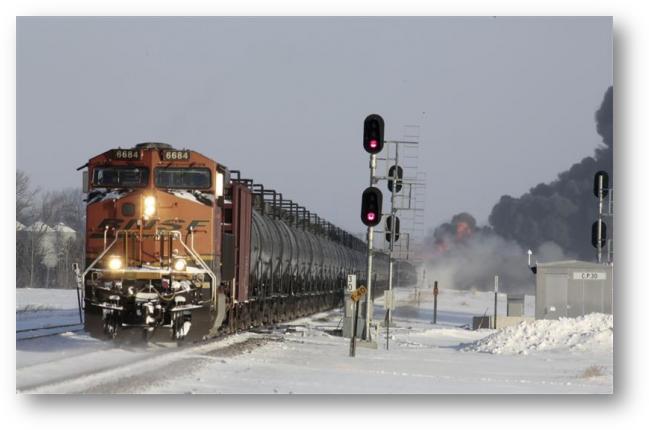 A plume of smoke rises from scene of a derailed train near Casselton, North Dakota December 30, 2013.

(Reuters) – A BNSF train carrying crude oil in North Dakota collided with another train on Monday setting off a series of explosions that left at least 10 cars ablaze, the latest in a string of incidents that have raised alarms over growing oil-by-rail traffic.

Local residents heard five powerful explosions just a mile outside of the small town of Casselton after a westbound train carrying soybeans derailed, and an eastbound 104-car train hauling crude oil ran into it just after 2 p.m. CST (2000 GMT), local officials said. There were no reports of any injuries.

Half of the oil cars have been separated from the train, but another 56 cars remain in danger, said Cecily Fong, the public information officer with the North Dakota Department of Emergency Services. The collision destroyed both engines on the oil train. Both trains were operated by BNSF Railway Co, which is owned by Warren Buffett’s Berkshire Hathaway Inc.

The incident threatens to stoke concerns about the safety of carrying increasing volumes of crude oil by rail, a trend that emerged from the unexpected burst of shale oil production out of North Dakota’s Bakken fields. Over two-thirds of the state’s oil production is currently shipped by rail.

“Approximately 10 cars are fully engulfed resulting in heavy smoke in the area,” the Cass County sheriff said in a statement, adding that local fire and hazardous material teams are battling the blaze. The sheriff said it was not yet clear how the collision had occurred.

City officials said they had heard a series of explosions following the collision, including one as recently as 3:40 p.m. CST, more than an hour after the incident. Residents within 10 miles were asked to remain indoors to avoid contact with the smoke.

The derailment occurred about a mile west of Casselton, a small town just west of Fargo, between an ethanol plant and the Casselton Reservoir, Fong said.

North Dakota is home to a raging shale oil boom that produced nearly 950,000 barrels of oil a day in October. It is also a major grain producer and long accustomed to a high volume of rail traffic.

But shipments of oil have surged lately, most of it the light, sweet Bakken variety that experts say is particularly flammable.

Trains carried nearly 700,000 barrels a day of North Dakota oil to market in October, a 67 percent jump from a year earlier, according to the state Pipeline Authority.

This summer, a runaway oil train carrying Bakken crude derailed and exploded in the center of the Quebec town of Lac-Megantic, killing 47 people. The incident fueled a drive for tougher standards for such shipments, including potentially costly retrofits to improve the safety of tank cars that regulators have cited as prone to puncture.

The Association of American Railroads recently proposed costly fixes to older DOT 111 tank cars that do not meet its latest standards but continue to carry hazardous fuels such as oil.

The fixes include protective steel jackets, thermal protection and pressure relief valves, which could cost billions of dollars. Oil shippers, likely to be saddled with the costs of retrofits, oppose some of the changes proposed by the association.